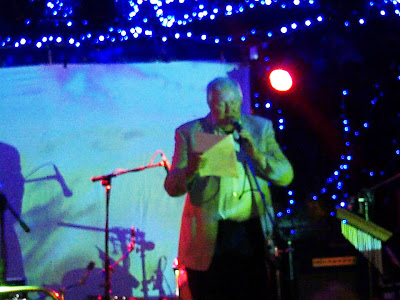 Frank Bungay - peoples bard
The Mad Pride Fundraiser was a great night out for me and we raised some cash for a very worthy cause. I like to be involved with people who are clearly concerned with the welfare of others and who are prepared to do some thing about that. There is so much apathy abroad in the nation right now and the reasons why are fairly obvious. People feel disconnected from government process and some have slowly absorbed the Thatcherite values that divide and weaken. She said there is no such thing as society only individuals and now we have a puppy in her mould who claims to have invented the Big Society. All of it is erroneous and ruinous and leaves people with the idea that nothing can be done. Wrong! As long as we breathe and care there is plenty to be done. Mad Pride is a hugely warm and powerful community that proves my point.

The Montague Arms is a sight for sore eyes for any musician playing UK pub gigs. I was the first to arrive as I like to have as much time as I can to absorb aspects of the gig and to settle in to a measured build up to the performance. The landlord opened up and let me in. The pub is definitely a cut above your average London pub gig. The décor is eclectic. You could spend a lost half hour just taking it all in. The stage and PA system is well appointed and reminds me of some of the better small German or Norwegian gigs.

Soon Steve the engineer arrived and I banged out a quick sound check. All good. Soon other musicians arrived and began sound checking. At one point it seemed as though there just wouldn’t be enough time to fit every one on the bill into a time slot. Mad Pride have a secret weapon in the shape of Jason Why who soon took over the role of organising this and we all slotted in very well. The evening started with a rousing intro from Jason and the first act went on. Against a back drop of projected images by VJ the Flickering Light, two young women gave us a couple of songs to begin the proceedings. One lass played a lovely white Fender strat and the other played African percussion. Cool and very different. Another young lass on acoustic guitar and a guy on bass delivered a couple of unusual and amusing songs and the evening warmed up.

Later we had poetry from luminaries in the poetry world, including the very wonderful Frank Bungay, a veteran campaigner and peoples bard. It was like a lovely time warp where the spirit of Kerouac and the beat poets was reverently invoked. I looked around to see the young listening intently to the old chap delivering his prose and verse. It filled me up with hopeful satisfaction. The best things last and last.

My new Australian friend David Studdert and his percussionist delivered some quirky, darkly humorous ditties and one lovely folk song. The event rolled on.
Later we had some great music from the band The Strange Agency who had driven from Wales to perform at the event. Slashing guitar driven psychedelic political punk. Oh yes! 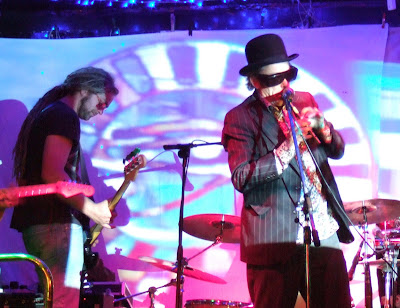 the strange agency
Yours truly took to the stage soon after and began with a new song called I’d do anything - with love. It seemed appropriate. I’d written a set list for the available 35 minutes that allowed me to choose specific songs for the occasion. I was genuinely and very pleasantly surprised by the audience response. People became quiet and I saw a few tears after The Christmas Song which always turns on my full emotion button.
http://edgarbroughton.com/a%20winters%20tale.html

In my happy bubble I floated through the rest of the set and it passed in what seemed like a few moments. At the end of my set the warmth expressed by the audience merited an encore but time was tight and I was over. Later I realised I had only played one old EBB song and no one seemed to mind or care. In fact most folk in the audience probably wouldn’t know this was the case. This is very satisfying because I have worked hard on the writing this year and it seems my new songs are doing the job intended.

In a few minutes time the lush, hard edged, political psychedelia of Brighton based Paradise 9 hit the stage to end the evening. More great sounds from another classy band and the job was done.
I had the opportunity to meet and chat with quite a lot of people and I made some new friends. Every one appeared to have had a great night and we made a nice profit for Mad Pride. I said my farewells and set off to catch the night buses home.

Congratulations to Mark and Dave and to all who worked so hard to make it happen. It was so nice to meet up with and work with musicians and crew who regularly make time to contribute to the communities that need support and the causes that matter. I felt right at home.


peace
Posted by edgar broughton at 20:08

Sounds like a good time was had by all. Activist groups like this need all the help they can get. Take care mate.
Dazza

Good work but it is not enough. It is the same old same old - a few people getting off their bums and actually doing something. Then it all falls silent.

Great to see a new generation of Jarrow Marchers who set off for London. If every town and city in the UK had a group of people set off for London on a peaceful march then the government could not ignore that especially not if we had repeat performances of these marches over and over again saying to the government "We come in peace and we are going to keep coming." As a bonus these sort of events would promote a real community spirit seldom experienced in today's hectic society. We cannot watch it on our television WE have to make it. It will not happen on our television. It has to happen in our STREET, our ROAD, our AVENUE etc. If things carry on as they are a lot of our choices will be removed. I have a choice what to buy when I go to say Sainsburys or Marks and Spencer they do not TELL ME what coffee or underwear to buy yet we are ALLOWING the government to dictate to us - they want something - we pay for it. We ALLOW ourselves to have no choice. We allow this to happen. We moan then let it go. They take our money, cut it, use it, steal it and do with it as they wish. When their venture fails we pick up the tab without much fuss. Would you pay, for example, your Doctor's credit card bill? Ironically if the government declared an end to all named dog foods and just one dog food would be produced called, oddly enough, simply DOG FOOD. There would be public outcry from all parts of the country - then you would see marches and protests as for some, incomprehensible to me, reason we care more for our pets than we do for our fellow human beings! Maybe we should question on what premise mental illness is defined. We should certainly re examine our priorities as a matter of great urgency.

After a work related injury I suffered depression for four years. Things are better but now I suffer with acute insomnia.I sleep on average 2 / 3 hours per day and only when I become too exhausted to stay awake.

If it were not for NHS support ( available at the time) I could have easily gone under completely and never re surfaced. Support the NHS and fight for it. It is under threat from so called Condem reform.

All the very best to Mad Pride and all the good people who support them and groups like them. Bonkers - who is not?

"Wrap your fingers in mine, I will stand between you and the darkest night".....tells about all reg a warm and including society where we all can fit in....keep up the pressure mate, YNWA!