in an english country garden 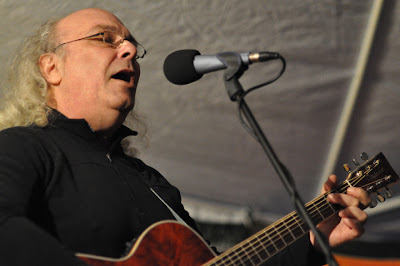 Saturday last I set out for Oxford where my host Peter and his mate John met me. After a short drive we arrived at the garden venue at Peter’s house. A large marquee and a tent for the sound mixer and a sheltered drinks bar were already set up. Peter told me that the stage area was originally to be the venue but he decided the dimensions of the tent would have meant me performing in a canvas corridor and any way we wouldn’t have got the 60 people, who attended, inside it. So like all of these gigs the host decided to expand the whole idea. I gather this happened over a long time and obviously took a great deal of planning and then lots of hard work to make it all happen. As the people began to arrive I soon re-discovered the common thread that runs through all of these events. The people at all of these events are very cool.

A local folk duo played first. Nice to hear British folk music delivered, as it should be, simple and sweet. The rain beat down on the tenting but had stopped before the next act. It was cold at around two degrees. Not what you would expect in June. 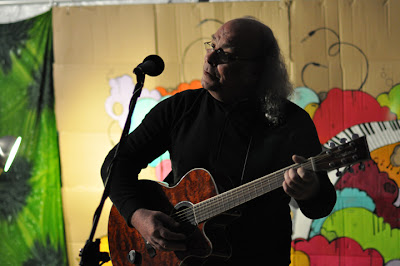 Next up we had a blues guitarist with one of the finest collection of vintage blues guitars I have ever seen. At the beginning of his set I took the liberty of changing the sound of his vocal microphone to improve the clarity. I tagged the mic so I made sure that would be my vocal mic. There was no need to hide away from my audience as I had been chatting with most of them and so I adjusted my microphone height and the microphone on my little 2 watt Roland Micro Cube. I can’t say enough good things about this little amp that kicks out a huge sound for it’s size. I am very happy with this little gem even though it is quite heavy and carrying it around in a rucksack is no fun.

Ali Pool, Peter’s daughter had painted a kind of urban art backdrop for the show and it looked great. It was a nice touch. I walked out and began my set with The Arabesque intro. I ran through the songs and this was the first time one of these events felt a bit more like a conventional gig. I had the best time as I ran through the songs. I was playing a Tanglewood acoustic guitar for the first time and it sings brightly and sustains forever. It was a bit strange at first but I had been playing it on and off all afternoon so it wasn’t as though I had to play it straight out of the box. My audience was lovely and very attentive. There were times when you could have heard a pin drop in the quiet sections. I told the story of the Christmas song and chatted a little about The Parliament Sq demo and the TUC march before Red Star. I didn’t say much more and let the songs do the talking. I am enjoying the fact that the new songs are doing their job and that the young people attending are just as enthusiastic as the people of my generation. 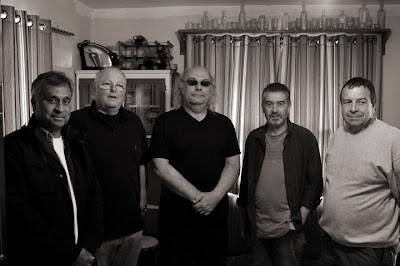 Don, John, me, Peter Pool & Geoff
I finally came to the Arabesque outro and the journey had taken us back to where it had begun. I do love that moment when people realise that we have come full circle. After I had finished I was called back for a couple of encores. After this I felt folk deserved another so I glanced down at my set list and couldn’t see any thing suitable. I could have kicked myself later when I realised I had missed out Six White Horses. I do things like this on a regular basis. Must be my age. Ah well, that’s ok then.
The more I perform like this the more I see that these events have become my laboratory. I see how some of this material can be made huge with the right augmentation and I am working on that. Meanwhile I’m having a ball.

As per usual I spent half the night chatting with those that stayed after the show. The young people had a small rave in the stage tent mixing some very cool techno on a laptop. I had to check this out and I am glad I did. I love my techno and always have. At around 3am a couple of the guys and Ali came in from the cold night to make the obligatory Rave Survivors Breakfast. They made toasted halloumi cheese sandwiches made with fresh rocket from the greenhouse. Peter had a few concerns about the future viability of his posh grill, post the sandwich creation, but all was well in the end and it tasted so good.

I must thank Lucy Pool who gave up her room for the evening where yours truly finally laid down at about 4a.m. Special thanks to Peter and Claire for their warm and generous hospitality, the assembled helpers and of course the audience for making it so special.

So it’s off to Leicester for some rehearsal with Luke and then on Saturday night we’ll be playing at the Donkey. See you there.

Posted by edgar broughton at 16:13

See you at the Donkey.We are traveling down from Norfolk to be there. Cant wait.

Thanks again Rob for a really special evening. Sorry about the temperature on Saturday - couldn't really plan for that one, could I?
Would have liked to hear white horses again but never mind, the rest including both old and new stuff was spot on.
best wishes
Pete Pool

These gigs sound like great fun. Hope you do some again as I'll be booking first! \m/

Lets all be at the Donkey tomorrow to support Edgar and Luke,they are magnificent.