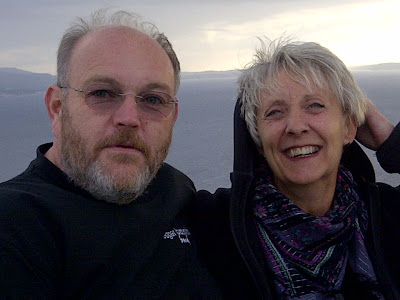 John and Val
﻿People often speak of the North and South divide that dictates whether a person is warm and friendly or cold and distant. Traditionally it has always been the south that gets the stick and the north that gets the plaudits. I really have no idea to what extent this is fair to either group but I have just had a lovely time with some very warm and friendly northerners.
I have recently returned from the Wigan area in the North West where I played the first of the Fair Days Pay For A Fair Days Work gigs at the home of John and Val Bradshaw to an invited audience of twenty-seven.

This proved to be a very happy and satisfying experiment but I could have had no idea of just how magical the whole experience would prove to be as I left London to head north on Monday of last week.
I say a huge thank you to John and Val and the special little community, and my new friends, who made my stay one I will never forget. I just have to tell the story of this adventure so I will post it here with photos in a while.

Meanwhile here is John’s tale of Edgar the Police Dog as a preface.


Are you sitting comfortably? Then I will begin.
Once upon a time up in the cold wastes of the north of England there lived a Police Dog handler called John. Believe it or not John was also a huge fan of the Edgar Broughton Band. He had always wanted to meet the band and his
dream came true one night in Morcambe at a venue called the
Gardens. John found that Edgar was very kind and signed all John’s old
LPs. Edgar in turn could not believe that a policeman liked his music.
As the two parted, Edgar said to John, “Since you like us so much and I
have made your dream come true will you grant me a wish”? He made a
wish.

Fast forward to Sheffield in 2006. John and Edgar meet again at
the Boardwalk where the EBB had just played. John said to Edgar, “You
will not remember this but I made your wish come true. There was a
police dog called Edgar”. The boss of the police dogs did not want this to happen. He said it was a daft name. John explained to him that Edgar was to be named after J Edgar Hoover the founder of the F.B.I. and he reluctantly agreed. John eventually confessed to the real reason but by then the dog was responding to his name and it could not be changed, and Edgar caught many bad men. 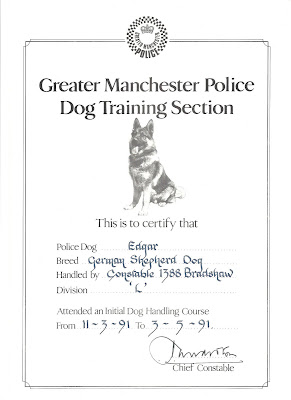 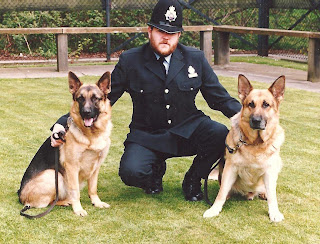 John with Edgar (in training) and Luger (retiring)
John has now retired and is living happily near Wigan. Fast forward to May 2011 Edgar has just played his first FDPFAFDW gig for John, his wife Val and their friends and what a fantastic night was had by all. Edgar and John are now good mates. So you see Dreams can come true and fairy stories have a happy
ending. Make of this what you will but it is true and I just love it.

Please note: John and Val have given permission for me to publish the story and photos on this blog. Others might decline for reasons of privacy etc. I will only post material on this blog related to FDPFAFDW events that is agreed to by FDPFAFDW hosts.

'And they called it Puppy Love oh I guess they'll never know.....'

Seriously though this is a lovely story John even looks a bit like Edgar, the man not the dog!

It made me think others must have stories like this to tell be nice to share them all on here.

Brilliant. Who would have thought it? You couldn't make it up.

awww, leaves me all happy warm and fuzzy!
As one of the 27 at this fish and chip supper and after hearing John telling me about EB, I am pretty hooked and looking forward to this moment on, as an official Edgar Broughton fan. Thanks for giving us you, for as long as you did. Mr & Mrs Bradshaws' lives will never be the same again!
They couldnt be any higher even if we were all on top of the Great Orme again :D

sounds like a really warm and glorious evening.if all the other FDPFAFDW,evenings go that well it will be a fantastic experience, with lots of good memories.Mr & Mrs Bradshaw seem like really nice people.

This all sounds very nice. I shall be mailing you soon with a request for my FDPFAFDW booking Edgar.

Lovely story Rob, hope we can match it. Just a month to go now and everything seems to be coming together.