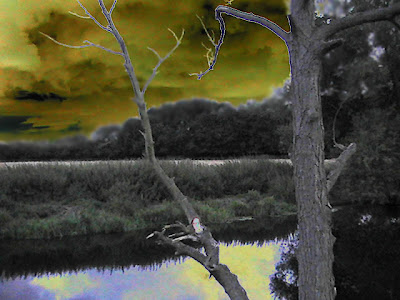 Saturday, last in Suffolk – I caught a little pike here just as the sun was fading. A nearby local authority is obviously still diverting excessive amounts of water in spite of the recent down pours. If no one fished these waters I don’t believe a single voice would be raised for the fish. I am thinking of the current state of this river as another example of the insidious way that corporate bodies in both the public and private sectors spoil our habitat. I don’t suppose that many of the hundreds of ramblers who walk the banks of this water see the decline in the water. Why would they? Two miles down stream from where the photograph was taken is the famous Flatford mill, depicted by Constable. The light here is wonderful and magical in the evenings. I have never seen any thing quite like it anywhere else. The skies are almost always, immense and beautiful. No wonder Constable loved to paint here.
Bartholomew Gosnold was born in Grundisburgh, Suffolk in 1571. Bartholomew made his first voyage to the New World in a tiny ship called Concord; it was on this voyage that he named Cape Cod and, further south, found a single small island which, in memory of his little daughter, he named Martha’s Vineyard. After obtaining a charter from King James 1 in 1604 for a ‘Virginia Company’ to settle Virginia, Bartholomew began putting together another expedition and, in 1606, he sailed as second-in-command of a fleet of three ships - Discovery, Susan Constant and his own ship, Godspeed. They landed on May 13th 1607 and named their settlement Jamestown in honour of the king. Many settlers died, including Bartholomew
himself, who died of dysentery in August of that year. Thanks to Bartholomew Gosnold and other brave adventurers Jamestown and other settlements were established and in future years others would come with their families and build on those foundations to make the USA into the country it is today. Little could they have known of the awesomely negative impact their decendants and allies would unleash on the world in our time, in the name of democracy.

As I write this I am hearing news of a savage car bombing that has taken place in Iraq. The death toll and injured list is appalling and it seems that things are escalating down hill at a fantastic pace. No one seems to have much control over any thing. Recently I saw coverage of a Government seminar on how to de radicalise young Muslims. Through out the entire proceedings Government foreign policy was never suggested as a possible cause for radicalisation of young Muslims. While this colonial idea of self-righteousness prevails we will see no peace.

Finally – back to the state of our habitat. On Sunday, all being well, Ramblin’ and I plan to ride out to the Climate Camp at Heathrow Airport. We feel the First Supperists should be represented and there can surely be no better way to arrive there than by bicycle. See you there ?

Posted by edgar broughton at 00:20

Religion has got to be the worst human invention ever,its the cause of the majority of suffering and death ever.
tony

What about the irony of Tony Blair being a 'peace envoy' for the Middle East? His actions and those of his 'oil' buddy in the States have brought about the civil war that now exists in Iraq.
Time for Gordon Brown to truly make a difference.

I was feeling a little down in the dumps, clicking here and clicking there in a pointless sort of fashion, when the EBB 'gigs' page opened and - manna from heaven - a little tour of the north.
Many thanks for giving us something to look forward to.

Blair repeatedly denied that government foreign policy had any influence on young muslim radicalisation. Brown is playing his cards close to his chest so far but I don't think he ever really bought the Blair line - given away by his silence on the matter. We can only hope that he rights a few wrongs in due course.
British governments in my lifetime have always tackled social problems from the wrong starting point. They never ask questions of themselves.Whether the problem is teenagers murdering each other or terrorists planting bombs,the debate is never about WHY
this is happening or what has caused this state of mind in the first place because it's too difficult to right the wrongs of bad housing, lack of opportunity, prejudice, unemployment, etc. So instead they start in the middle with how severe the punishment for this rebellion should be or how many civil rights should be removed to help control the problem.
Do you recall Cherie Blair declaring in an unguarded moment that she understood why people without hope turned to terrorism ? Very quickly the spin doctors jumped in and tried to convince us she didn't mean it the way it sounded. Shame, because it was the most sensible statement to emerge from No.10 for years.

Flatford Mill is a wonderful location, thanks for reminding me it's time I went back, not been there for years. I think the haywain was still there last time I went !

is this worth 8 million pounds ,
i became prime minister, i had thousands of women ,children young men, old men, old woman killed, george Bush patted me on the head! then i resigned and became a peace envoy
Kerfuckinching!

SHOULD NOT BE ALLOWED
very angry
tony

An 11 year old boy !Man, what the fuck is going on !!
11 years old never had a chance to have a life !
glad im old and grey and on my way cos who wants to stick around in a place like this
tony sad and angry.