the ballad of wild willy bass 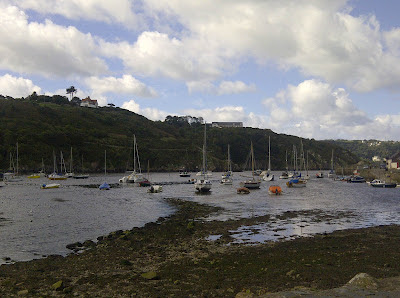 Having just returned from Pembrokeshire in South West Wales I am now ready for the last of the 2012 gigs. Next up is the CRY Benefit on Saturday in Burton on Trent. Next weekend is the Leeds gig followed by a FDPFAFDW gig in Leek. See GIGS page on website for details.

I was away for two weeks and it was just what the doctor ordered, not that I have been even slightly unwell for a very long time. The plan was to spend serious fishing time in the quest for the elusive sea bass. Well it has been elusive to me and quite a few others. It has been generally a very poor year for fishing. 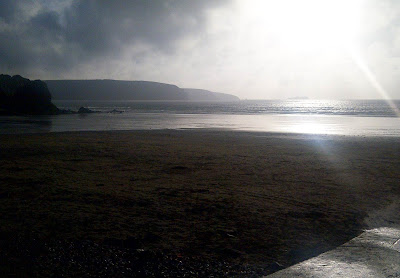 Five minutes to 5 oclock in the morning. Three alarms ring at five minute intervals. It’s now or never. A quick dash by car to meet Matt Powell a Michelin starred chef with a passion for foraging and bass fishing. He guides people like me to where the fish might be. In the early light we scrambled down a cliff face to the rocks below. I had already declined one access path as unsuitable for some one of my age so we had continued along the top of the cliff where Matt found a slightly easier and safer access to the rocks. We soon had lures flying out from our some times precarious perch atop various rock ledges and peaks. I got the odd soaking from the odd small rogue wave. The tide was receding and as the water fell away a moonscape terrain was revealed. I would definitely look at a mark like this at low tide before fishing it but of course Matt knew the lie of the land. 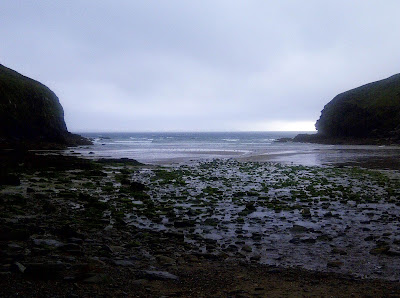 We fished hard from about 6.30 until 12.30 in the afternoon. I was knackered and it would take two days for the aches in my upper legs to fade. All part of the price of a great and exhilarating experience even though none of us caught a fish. We climbed up back onto the cliff top and headed back to the parked cars. Matt produced a compact array of cooking gear and began to make breakfast. 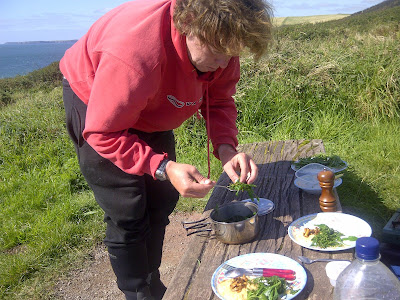 Omelettes to die for with mushrooms and greenery foraged locally and lava bread of the highest quality. 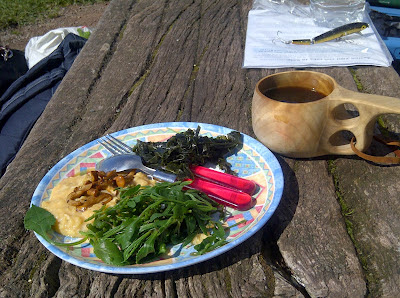 What a wonderful meal this was and after we sat with kuksas filled with tea and full bellies. Matt is a very interesting companion with a sincere desire to do something sustainable and clean. As a foraging bass guide I believe he has re-invented himself admirably, offering a great service with lots of learning around a broad eco centered base. I wish him well. I am sure we will remain friends and it goes with out saying I’ll be back for more. Lots of time was spent looking for great places to fish and this meant driving parts of the Iron Man Wales circuit that was used for the cycling stage. I can tell you Pembrokeshire around the Tenby area has some very steep climbs so after a swim and a 119 mile bike ride followed by a marathon they all deserved a medal. 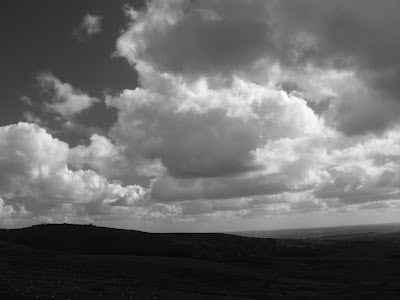 The countryside is spectacular and we only scratched the surface. We fished quite a lot but didn’t catch much. In the second week of our quest we became comfortable fishing on the dock at Milford Haven. The weather and tides were against most beach fishing and fishing on rain soaked rocks so we settled for a couple of our last nights in wales on the banks of the estuary opposite the Milford Haven oil refinery. It’s a bit grim in parts in daylight and huge contrast to the vistas deep in country but at night the lights are quite spectacular. I had caught a small Pollack on a tiny metal lure on a very light rod which made the little fish feel enormous. LRF , light rock fishing is the name of the game and seems a logical method given the rarity of lots of large fish. So, as the rain began to fall on every one fishing this spot we began to consider cutting our losses as we had a long drive next day. I decided to change my bait from worm and mackerel to large pieces of mackerel fillet. It was to use the bait up as much as any thing. Minutes later the tip of my rod bent over and then nothing. My heart was pounding when the tip went berserk and I just had time to reach out to stop the rod going over the wall. I was into a large feisty sea bass. Two days later he provided the main dish of what was a really special feast. I have only taken one fish for the table this year and this was the one I had been set on for this summer. Fantastic! The last cast and there it was. 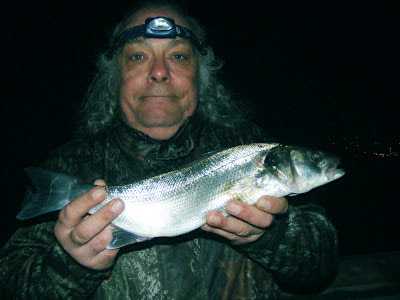 a bar of silver and a very dazed fisherman

The trip west was superb and we will be going back. The Welsh are lovely people and the country has real heart and character. Although Wales has it's share of poverty it has been largely unspoilt by the lack of gross tourism and over commercialisation such as you will find almost every where in Cornwall. Like every where else I have been lately the high street shops are fading whereas the Charity shops are springing up every where. Pembroke itself has a great community feel and there is plenty of evidence of community support initiatives locally. I caught a nice little perch off the bridge there during a short rest stop.
It is always nice to be home but I miss the smell of the sea and even the bitter wind that howled through the high open spaces. It was great to get away and out in it all. I spent some time with my guitar and managed to progress the writing of some songs a little bit further on.
I shall spend Thursday, tomorrow preparing for the upcoming gigs at the weekend and next week and then it will be rehearse, rehearse with the new band.

Posted by edgar broughton at 21:46

Nice fish mate. What a great life you have. You deserve it all. What about the new young kids at LFC? Fantastic.

The bass are as difficult to catch as an honest banker.

Sounds like you really enjoys life, agree with Dazza, well deserved....it was about time you finally got yourself a fish :)
Big hug to Loz please

Sounds great Rob. Look forward to catching up with you soon :)

Sounds like you really enjoys life, agree with Dazza, well deserved....it was about time you finally got yourself a fish :) Big hug to Loz please