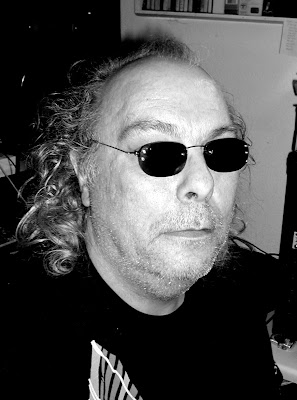 ready to rock with the Norgers after I have shaved
The EBB spent three days over the weekend rehearsing for the Norway show at the Garage in Bergen. We worked with new and old songs and have put a couple of old favourites back in the set. I guess the set we will be playing is more or less the show we did at the Gagarin in Athens last year.
We are all looking forward to going back to Bergen. Norway is a beautiful country and the people are very warm and generous. It has been a long time since we were all there together. Andrew was with us when we last played in Norway on The Six wasted Days Tour with Roy Harper, Strawbs and Tony Mcphee's groundhogs. Gentlemen every one of them. Luke was with me and his mom as a toddler years before that. In between sledging trips in the hills with Luke and exploring the snowy streets, I was producing a record for a Bergen based band called Electric Rain a very unusual and original line up of local guys. That was a challenging and some times surreal experience with long hours hunched over a mixing desk in a small studio just outside town. I remember that in the early stages the studio owner, engineer and house producer was annoyed that a local band was importing help from the UK. He used to change the patch bay of connected equipment so that it was different when I returned for work in the mornings. I laugh about it now but it was tough at the time. I remember recording a bass part that required me to punch in the bass every time the bass player made a mistake to re record over the mistake. It has to be done very precisely in between the last played note you want to keep and the notes you want to re record. Aaaargh ! There were more than twenty punch ins made to get through the whole piece. I think my skill with the record button was well noted and respected and it was a bit like earning my colours. On a particularly exhausting day I did record an over dubbed guitar solo on the wrong version of one of the songs. Fortunately the guitarist who was a very nice guy decided to do it again the next morning for his own reasons for which I was extremely grateful. I didn’t even have to own up to my mistake. We finished the album in England for which I was again, extremely grateful. We were working on tape then and with out a computer in sight. Happy days and fun people. 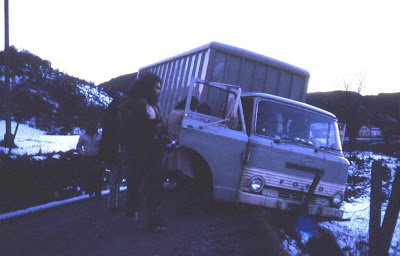 Touring in Norway has not always been a fun time. We once lost half our gear down a mountain side after our truck crashed into an avalanche on a mountain. One of our crew spent time in hospital. Many years later a guy called Terry from Bergen, who was co-promoter with the late Ziggy Bardsen on the tour, admitted he had stolen and sold two of my prized Marshall amplifiers from the crash site. We always thought he was as dodgy as a West End hot dog but it was a shock all the same. While professing to be our friend he turned out to be just another talentless low life and thief. We once crashed our Range Rover into a railway bridge on our way from Oslo to Bergen on a sheet of ice inches thick. We drove hundreds of miles with a great v shaped dent in the bonnet. The engineers at the factory in Solihull were as amazed as we were that our beloved chariot had made it home to the UK.

We have made many friends in Norway down the years and many of them have gone to great lengths to help us and lend support. It will be very good to catch up with some of them. The show is already sold out so it should be a great night. I remember a show in Kristiansund when the good local council had decided that the show could only go on if I promised not to include "the masturbation sequence in the song The Phsycopath" as reported in the local paper. The first thing I did when I walked on stage was, well you can guess. The whole place went crazy. No one had the courage to pull the power on the EBB ( it is still a risky idea ) and we all had a ball. We've trekked through blizzards and played in far away northern venues where the kids all had earplugs because the local papers had told them we were the loudest band they had yet seen and we were. A great country. I still have to travel to the lands of the Sami. Perhaps it is only another of my romantic notions but I believe this land to be a spiritual home for me and it is the land of my star sign ( man).

Steve, who was in Bergen on holiday recently, says there is great Vietnamese restaurant in town so I shall try to make a pilgrimage there at some juncture. Other than that I don’t suppose we will have very much time to do the tourist thing. We rarely do. It’s usually a mad dash to get a bit of shopping and that’s about it. Norway is a great fishing venue but I almost never get the chance to cast a line while on the road. Its tough at the top.
We don’t have any shows planned for a while so it will be back to recording when we return as soon as we can all get organised to get back to it. There is much to do this year if we are to keep to the plan. It should be fun. Mean while back to the now and the Norway expedition. Roll on. I’m already packed. I'll see you there and as always come up and say hello. We don’t bite ( unless you like it).

P.S. I’ll give you your CD at the gig Jarle. Yours will be in the post Tony.

Posted by edgar broughton at 23:32

thank you Rob, i really hope you have a splended time in Norway! I'll be there with you all in spirit!
have a good trip
cheers
tony

Fun reading for a norwegian !
Ups and downs in my country :)
I remember very well the incident with the Psychopath and that was also the reason why my mother refused me to go to Stavanger to watch the concert.
I was told following story by the daughter who's father worked in the paper ;
The editor in the local paper in Kristiansund sent a telegram to the editor in our local newspaper saying that every effort should be made to refuse the EBB to go on stage, "if you don't want to experience a man masturbating on stage and also music loud enough to destroy every ear being present, you should stop the concert, was some lines written.
In Stavanger, they didn't do very much about it, only small letters, because they figured that a (big) warning like that would make youths more curious and show up in bigger numbers...
I read a review of the concert( I believe I still have it somewhere), and remember it said : "EBB from England in good shape" as a headline, with a picture taken from stage showing Rob's back, with his guitar facing the audience in a number of appr. 750.
I quote :The show started with a totally dark hall, from the stage a synthesizer pumped out heavy rythms and suddenly a bright light was set on Art Grant, grinning, playing his bass on one side of the stage, then another light was put on the other side and there came Edgar Broughton, dressed as an old man, with his guitar, a long coat and a big hat,and at last lights on Steve Broughton on drums it was a fantastic frame introducing the EB goldie/classic Psychopath.
Later they played amongst many goodies, Gone Blue, a marvellous rocker, the quiet and beautiful Green Lights, where EB was alone at stage playing his guitar and a new song called One to seven.
Edgar Broughtons special powerful voice was mentioned, his efforts to try to make the audience singalong and clap their hands and the fact that the three together was deadly confident, safe and skillful in all they did on stage.
And finally ; it was a great concert the audience will remember for a long long time...I seem to remember the review ended....

It all sounds very exciting. What an interesting insight into life on the road. I love your strange and evocative prose Rob. I've not read any thing quite like it and I am sure the novel will be land mark. Can we please have more of these kinds of stories about the band on tour. I am sure most of have no idea about what is really involved. The piece about the recording was a good example.
have a good trip guys.
Pam
x

I was thinking tonight why I was still a librarian after all these years. And it went back to hearing a recording on an old cassette about 30 years ago of Out Demons Out at Glastonbury Faire. The concept of the dignity of work still appeals to me. About 10 years ago I tried to find the CD of the concert but it never made it from vinyl. I can;t find the lyrics on the web and actually you couldn't translate the inspiration.