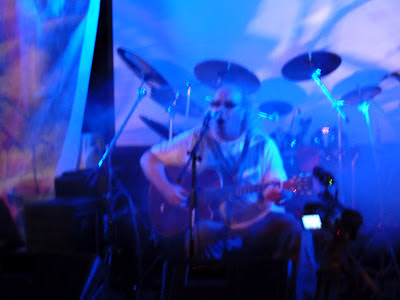 ﻿"Ive had to change the venue to South Wingfield Social Club, 43 High Rd , South Wingfield , Derbyshire DE557LX , as there are a lot of people coming and the other venue , wasn't big enough , we have some local bands playing as well as my very good friends Harvey Bainbridge and Jerry Richards ex Hawkwind , will be there”.
The above was part of an email I received from Martin Needham prior to heading to Derbyshire for his birthday bash so you can understand that I thought this was going to be a bit different from some FDPFAFDW gigs. I would not be disappointed.

After a fairly relaxed journey to Nottingham I caught another train to Alfreton where I was picked up by Martin and his partner Sharon and delivered to the nearby Travel Lodge. I checked in, went to my room and unpacked my gear. I went to use the bathroom to find there was no light. Not a broken down fluorescent tube for me but no tube at all. I went back to the desk to report this and the insipid individual showed no surprise, in fact he knew already and asked me “Was this ok?” OK? I shouted. I asked how I was supposed to use the bathroom in the dark. He gave me the key to another room and I left. What an idiot! I didn’t think this was a portent of things to come for one minute and later, I was glad to find this to be true.

Onward and upwards and it was soon time to go to the gig. After a short drive in sunshine through leafy lanes, up hill and down dale, we arrived at The South Wingfield Social Club high on a hill. The venue used to be a Miners' Welfare hall built and run by the miners for the benefit of the community and their families. Almost all of these welfare schemes had their origins in the 1920's or 30's and were funded by weekly contributions deducted from the miners' wages, initially to build the schemes and subsequently to run them. Some of the schemes had the word "institute" in their title, probably an indication that they also had an educational as well as recreational purpose. Whatever their title, they all had one thing in common; they represented the hopes and aspirations of the men who worked in the mines, and their families. I walked into the hall and found it to be more or less what I had imagined.
The music was in full flow with a kind of New Order Hybrid / Chapman Family style band playing some cool songs with the aid of a drum machine. The singer had a great and distinctive voice and I sat listening and expecting more of the same but this song and the style it was delivered in was a one off in terms of what followed. This was a very,very good band and very nearly a great band. I was fascinated for a while. I thought how fine the line is between some thing really great and something nearly so. As a performer it is sometimes very difficult to see the difference and most of us tend to hope the song we are currently working on will be the best.
Soon more and more people arrived and soon the place was filling up. Outside a very well appointed fast food van was busy feeding the guests. Nearby a large field was in use as a camping area. The club occupies a large area and has it’s own bowling green which is in top condition and is an indication of the dedicated work that goes into maintaining a quality venue of any kind.The late afternoon session became the evening session and the music took on the distinctive flavour of the post Hawkwind movement with lots of gorgeous old analogue synth flavours and the obligatory, occasional narrative in the style of the electric poets and sci fi writers of the late 50’s through to the mid seventies. That is when it all first happened and here I was in the museum of a time that is loving maintained and perpetuated by some performers of that time and adored by a surprisingly large group of silver machined acolytes. Wonderful! 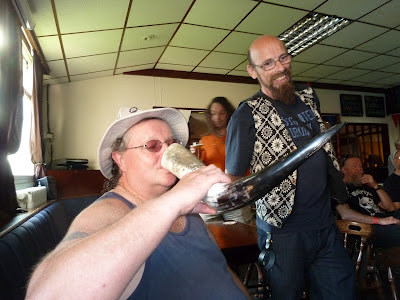 By now I had met a good few folk I vaguely remembered from former years and some folk that I had not met but who knew me from the EBB. It was interesting to hear their stories and what life had dealt them. There were some sad stories but many more uplifting tales. Most people seemed to be doing ok and all were set on having a great night out at Martin’s birthday party. 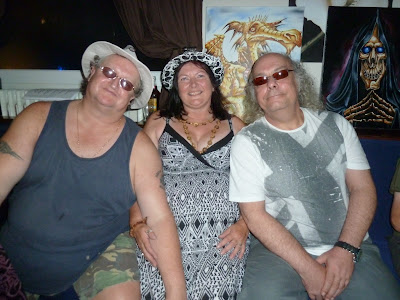 martin - sharon and yours truly

The lighting and sound crew were really good. People had taken a great deal of time and trouble to put this together and there was a genuine feeling of community. I couldn’t help thinking that the venue management and staff were a shining example of what can be done to meet the needs of a local community and to move with the times in constructive and positive ways. 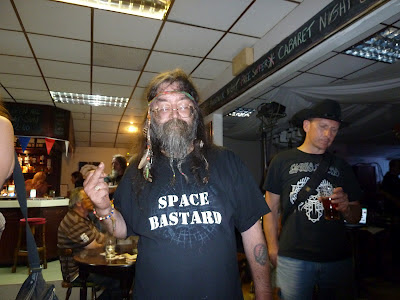 Among the various chats I had with people I remember a discussion about political participation. Many years a go, while on a family holiday in Cornwall, my son Luke, who was around 12 at the time, discreetly drew my attention to a man walking towards us. After he had passed Luke asked me “Why do older men start to wear bait (slang at the time for rubbish) clothes”? Though there was some amusement behind the question, it was a genuine question and I could see what he meant. The chap was around sixty and dressed in clothes that were pale shades of grey, green, beige and brown. It was a kind of uniform for the fading. If the monks of old wore sack cloth and ashes to atone for their gravest sins then this man looked like he was just saying “sorry”.
It is as though there is a voice inside that whispers to some of us – You are old and should look like it. Know your place and disappear. Become invisible slowly.
By comparison some women often go the other way. For some a permanent wave / curled hairstyle becomes obligatory. This seems to go with garments covered in hugely loud, floral designs or great geometric nonsensical patterns that assail the eyes. Garish becomes the new black. Any way, my point was some thing similiar also happens to political participation and to people who used to be involved in agit prop politics. They give it up as though it is some thing for the young. As though it is unseemly to protest in a righteous cause at a certain age. I say if you can walk then march and if you can't then there is always 38 Degrees for most of us.
If you can march then be there with the rest of us. I know these are the days when if we don’t act it might be our last chance to do so with any effect all. I might have slightly upset a couple of folk with my rap on people participation and references to what I call hush puppy and perm time but it’s my job.

Time passed pleasantly and soon it was time to perform. Within the whole of the assembled throng my people made their way to front of the room and the others headed for the bar where they could chat noisily through my entire set. I have become more able to shut myself off from the distractions and myself and my listeners had a nice time – thank you for asking.
People who listen get it. They know what I am saying and why. They understand that my songs are for them and of today with a small selection from yesteryear. I had a great time and only made a couple of tiny errors. My set was caught on video by two separate crews so some of it should be worth a look when I get the footage.
Below is a version of Speak Down the wires performed at the party. There will be a free signed copy of BY MYSELF for the first person to leave a comment here, identifying the non deliberate mistake in the song. 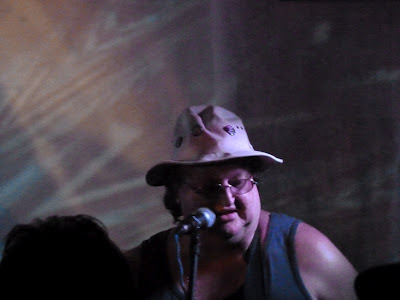 OK top of the bill next. Martin Needham A.K.A. Dr Has been and the band took to the stage. Previously Martin told me they were “crap” but “it was his party and he would play if he wanted”. Quite right too! Any way, as it turned out, the crap comment was obviously an expression of huge self modesty because they were in fact very good and I really enjoyed their set.
More chatting and then back to the Hotel, sleep and home on the train. We drove back to the venue in the morning to finalise a few things and then I got a lift to the station where it was bye, bye Derbyshire. I had a really great time as I do at all of these gigs. I honestly think that I have gained more from almost two years of Fair Days Pay For A Fair Days Work gigs, than from any others in the past 30. Martin is a promoter so I hope we will work together in the future. Meanwhile my thanks to Martin and Sharon and to all at the gig for looking after me and making me so welcome.

Next stop Manchester for a FDPFAFDW gig on Saturday for Dave Owen and Nicola Taylor. This will be a good 'un! I just know it.

Is it the word 'the' missing from the refrain 'speak down the wires', you actually sang speak down wires. It was a beautiful performance.
Sue Ford

Thanks Sue but no, that was intentional.

Well I've not contributed for a while, although I've been reading your posts. So it hardly seems fair to jump in with the answer to the non deliberate mistake. But 'Wires' is a fave of mine as I play 'Bandages' all the time but never heard you being called back from a shelter before ! It's a graveyard in the version I have !
I'm already the proud owner of a signed 'By Myself' CD so someone else can claim that. Your voice on the Youtube track is just so, so good. I think it's got better and better over the years. Awesome live, Rob, just awesome. A good point in your post about people giving up politically as they get older. I always think you should stay angry but somehow it gets draining over the years as it seems that we're fighting the same old fights as the politicians make the same old mistakes over and over. Right now we are, once again, in recession and the politicians will, once again, rebuild the monetary system in the same old way so it can collapse, once again, in another ten years. When do we stop saying, 'I told you so'? In the words of the song, 'when will they ever learn?'
I'll keep banging on about what I think is right and wrong but I understand why some others just get tired of the endless fight. Stay angry and don't stay silent.
Shoreham Steve

Hi Steve
Well spotted my man and thanks for the kind words.

So Sue you can have the CD, Please write me your postal address in an email to

You are singing better than ever. Absolutely beautiful.