I have been mostly travelling since the beginning of September with three weeks in Wales, a week in Weymouth, a week on the East Anglian wet wilderness and a week in Wigan staying with my good friends Val and John Bradshaw. John is my northern road manager and both John and Val have been and are hugely supportive of my new adventures and projects in music. Even in the middle of settling in their new house they went to great lengths to support and assist me. The plan was to play for Gary's dad in Sheffield, a fair days pay gig on the 4th October that I had been looking forward to for some time. I met Gary and co at Tony and Helen's Fair days do, also in Sheffield. Their's was the second FDPFAFDW gig after John and Val's. Sunday was designated a chill day and I managed to get on a canal down the road and caught a feisty little Jack pike. It was nice chucking lures with John and my mate Aztec, the German Shepard. Her twin Inca died recently so it was a bit sad. I missed him cos we were tight. Enough said.

Monday we were to host Walter Kohl a writer from Austria who came to discuss a collaboration on a Faction involving yours truly. As well as being a life long fan, Walter is a very well respected writer in Austria so I was looking forward to meeting him very much. Tuesday was reserved for a meet with a guy in Wigan who has some great ideas around an alternative style gig which resonates with me perfectly at this time. We are planning a charity benefit gig involving a couple of other musicians. Details to follow but it's all in the brainstorming stage right now.

Saturday soon arrived and John and I set out towards Sheffield in his trusty BMW Rover. I always feel a little like I used to in the old EBB Range Rover, safe and secure. John had an idea of the route he would usually take but his super robot Sat Nav had other ideas and I am so glad it did. We left the thronging traffic on a section of motorway and drove out on the back roads, through lovely villages headed for the hills. My heart leapt as we rounded a corner and there was the sign SNAKE PASS. I had never been there before or if I had I was almost certainly asleep in the back of the EBB car. It's not a route a band on tour would take if a motorway was handy. Joy of joys! As we climbed the mountain out of Glossop I began to study the road from a lapsed cyclist's perspective. It's quite a climb that I would prefer to descend than ride up and I wondered if the descent into Sheffield might be the easier side to climb. Currently I have the first item on my so called bucket list and I intend to realise this next spring in the Tour de France climbs of France. 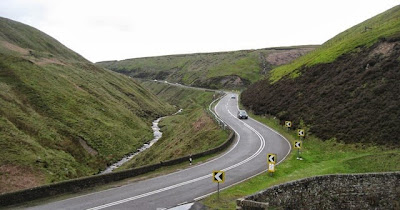 The plan is to have John drive Ramblin' and me up a few climbs such as The Tourmalet, Ventoux and other notable climbs so that Ramblin' and myself can descend. Down hill for miles, LOVELY! As John drove me up Snake Pass I thought this might be a good rehearsal zone and decided I will do it after the winter snows, that close the pass, have abated. John seems up for almost any thing and is very encouraging as my eyes scan the climb. At the top the views are spectacular. The descent is twisting and quite technical with false flats and a few twisting hairpins that come out of no where fast as you pass the river Ashop and huge Ladybower reservoir on your right and head past the Rivelin dams along the river Rivelin. To ride or fish that would be the question ha ha!
Any way I decided the climb from the Glossop side would be easiest, how ever slowly I might go if I was to ride it, and the descent into Sheffield would be very fast and demanding. I could always drop in for a cuppa with my Sheffield FDPFAFDW mates.
Soon we arrived at Gary and Sally's home where we were warmly greeted and made very welcome. 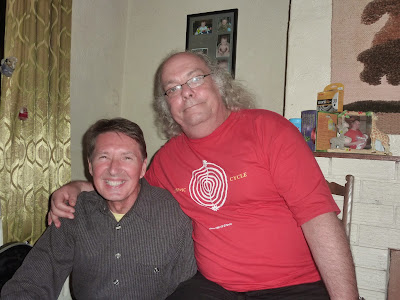 My performance took place in the kitchen. I had such a great time. drinks in the interval, another set of songs, some very new, and then supper fit for a King never mind a minstrel such as I. What lovely, lovely people! We chatted about the state of the nation and lots of other cool stuff and I met little Ronnie again. I met him at Tony and Helens bash when he was tiny. We had a lovely chat and he had a strum on my guitar. He is the brightest little chap and a fan too. How cool is that and he's not yet four years old. 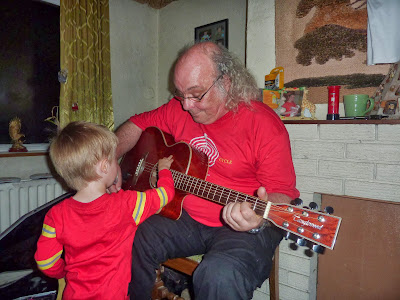 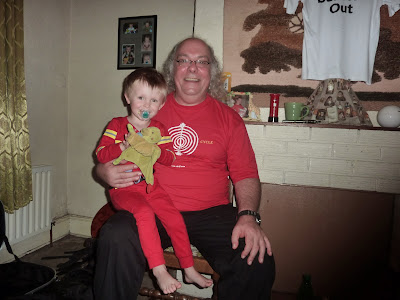 After some photos together John and I headed back towards Wigan. 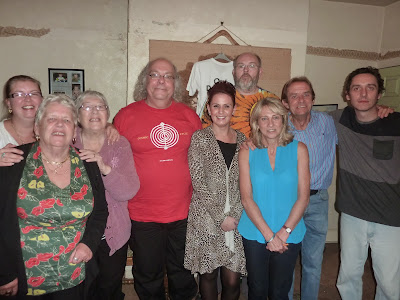 We left with warm hearts and sweet memories of another lovely evening out in the north. It was dark as we climbed back up the Snake pass and I had remembered the road well. I knew when the top was coming  and as we crested the summit the view out over the valley towards Manchester was truly spectacular. I am determined to try to ride that road next year as soon as the weather is good and the road dry.

I fished the next day  and met up with Walter Kohl on Monday. He interviewed me for most of the afternoon. We found we had lots in common and most importantly discovered we have similar aims as far as art is concerned and so we spent a long time talking about writing. It is true that I should write more than talk about writing but the meeting gave us both insight into how we might proceed on a couple of projects.
We all went out for dinner later in the evening and then spent another couple of hours chatting. Next day John and I took Walter to Manchester airport and we said farewells and vowed to meet again soon. We headed to Wigan to discuss plans for the benefit gig and left with a good feeling. Mission accomplished.

I am about to begin two weeks rehearsal with the guys in Warwick and then I am off to a FDPFAFDW gig and a private party gig in Lincoln. I am very busy and having a great time.
I am also getting a few ideas together for a collaboration with Rick Mantovani. Some of you might remember seeing him when he toured with the EBB as Steve's drum tech.
As well as being an accomplished drummer in his own right, he has developed a very interesting music form based on drones and time stretched sound elements. Just my kind of thing. I just have to play some wacky guitar and try a few "no language lyrics" out on some of his pieces.
I haven't had any success finding an electronica person for the new band so the thinking is to find another musician who can also take on that role. If you might be interested the gig could be yours.

I'm working on a new show which will be a FDPFAFDW part 2 for 2014. I'll keep you posted.
You can see some of my new stuff at THE BORDERLINE on the 22nd of November. I promise, after what happened last time, with poor Mick Farren, it will be special.

Check out THE PEOPLE'S ASSEMBLY  at http://thepeoplesassembly.org.uk
All good stuff going on across the land. LET THE GAINS BEGIN!